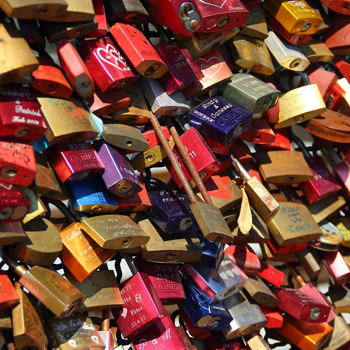 Here at Next Day Locks we love a story about security products, and this one’s a real controversy!

The phenomenon of love locks (padlocks which couples affix to bridges to symbolise their love) experiences a surge around this time of year due to Valentine’s Day. Not everybody appreciates the sentiment however, with one person’s romantic gesture being another person’s mindless act of vandalism.

This trend exploded during the mid-2000’s, turning from a rare and somewhat quaint expression of love into a “must do” activity, particularly in cities with romantic connotations and famous bridges, such as Paris and Venice. Padlocks can be seen adorning bridges in their thousands, and some dedicated padlock sellers even make their livings by targeting couples on or near such bridges. But do the benefits to these cities, such as tourism and jobs, outweigh the costs?

Many would argue not. Residents and authorities alike have spoken out about the damage this is causing to some of the world’s most historical bridges, not to mention rivers such as the Seine, which lovers will often throw their keys into after securing their padlocks.

Rust damage, parapets collapsing from the weight, and polluted water, all being major causes for concern, not only endangering the public but with repairs and maintenance costing local authorities thousands. Most of the countries in which love locks are popular have attempted to discourage or even ban the practice, with Berlin and Venice introducing fines of up to €3,000 for anybody caught leaving locks.

The Pont des Arts Bridge in Paris seems to have experienced the worst of the craze, with an estimated 45 tonnes worth of locks having been removed from it as of 2015 – that’s over a million padlocks!

Originally designed as a suspended garden, the Pont des Arts was built during Napoleons ruling, and was the first metal bridge in Paris. It is an iconic structure, featured in countless films, TV shows and even songs. Therefore authorities and residents alike are eager to preserve its integrity and, in 2016, introduced “anti-love lock” plexiglass covers to deter tourists from leaving more padlocks – not without debate however.

Many a disgruntled tourist took to the internet to voice their disappointment over the padlock removals and plexiglass, arguing on review sites such as TripAdvisor that, now, the bridge is “nothing special anymore”, “just like any other bridge” and even that there’s “no point [visiting] without the locks”.

Regardless of such disagreements, campaigns such as “No Love Locks” continue to try and spread their message about the damage this trend can do. Some have also pointed to the questionable symbolism of a padlock for love, and the “Unlock Your Love” and “Save Our Bridges” campaign propaganda continues to gain support globally.

Controversy aside, what of the moral dilemma regarding padlock choice? In our industry, it’s important to choose a sturdy padlock which is fit for the job. And if you’re buying a padlock to take on a romantic getaway, as a symbol of eternal love, make sure you get a strong and durable one so you don’t upset that special someone! Or perhaps one with a 10 year guarantee might be in order so that you can return it if things don’t work out…